PURPOSE OF THE STSM

23Na magnetic resonance imaging and spectroscopy of the kidney could provide added value in the determination of tissue viability and possibly provide additional information useful for the early diagnosis of kidney diseases or treatment monitoring. Further, sodium triple-quantum signal could give insight into cell viability by linking the triple-quantum signal to the sodium-potassium pump activity of the cells. Signal values of healthy and diseased tissues have to be established. Preclinically, a global spectroscopic 23Na sequence, ‘’TQTPPI’’, was evaluated with a bioreactor filled with human HEP G2 cells. Further, a sequence localization was programmed on the preclinical scanner and tested on a phantom and in-vivo rat.
The purpose of this collaboration was to transfer the method from the preclinical system to the clinical system to allow for a regional analysis measuring the sodium triple quantum signal of the kidney using the 3T and the 7T systems of the host institute. We aimed to acquire, for the first time, sodium triple-quantum spectroscopy and images in the human kidney, to highlight the potential of sodium MRI and spectroscopy as a biomarker for renal imaging and potential early indications of chronic kidney disease (CKD).
Further, the STSM purpose was to start a collaboration between the research groups of Heidelberg University and Aix-Marseille University with complementary expertise to investigate kidney function. We intend to complement the know-how of preclinical sodium triple-quantum spectroscopy signal measurement of the Heidelberg University with the clinical sodium imaging methods of the Aix-Marseille University. The combination of techniques can allow a more complete and accurate analysis of renal function.

DESCRIPTION OF WORK CARRIED OUT DURING THE STSM

Due to promising triple-quantum signal results at 3T and 7T phantoms as well as in human head, we transferred and further developed the preclinically tested TQTPPI sequence in the first step. The TQTPPI sequence is a three pulse sequence which is repeated according to a predetermined phase-cycle to filter for single – and triple-quantum coherences. Additionally, the time between the first and the second pulse (“evolution time”) is incremented synchronously with the phase cycle. This approach filters for the desired coherences and has the benefit of yielding the relaxation information of T2,long and T2,short, which can be obtained by a fit along the evolution time dimension.

Stepping from preclinical to clinical measurements, multiple challenges arise for 23Na regarding 1) signal-to-noise- ratio (SNR) and 2) specific-absorption-ratio (SAR) limit. The SNR is ~6000x lower for sodium MRI compared to proton MRI due to a lower gyromagnetic ratio (g23Na = 11.25 MHz/T , g1H = 42.58 MHz/T) and a lower abundance of sodium ions compared to free protons. For triple-quantum sodium signal, the SNR is even lower with ~0-30% of the single-quantum signal, depending on the tissue type. We opted for an imaging approach by transferring the global spectroscopic sequence to a 2D imaging sequence based on a 2D FLASH sequence which is standard in 1H MRI. The first pulse of the triple-quantum(TQ) filter was modified to be slice-selective and the FLASH readout was added after the third TQ filter RF pulse. The 180° pulse of the preclinical TQTPPI sequence was omitted for SAR and hardware power limitations, and in a first step, the repetition time TR was increased to reduce the SAR level. In a second step, we changed the pulse width for the slice selecting pulse to lower SAR while keeping a 90° excitation pulse and reasonable TR.

The pipeline to post process and obtain the desired images yielding SQ and TQ information from the raw data was developed.

Phantom Measurements: We tested the 2D TQTPPI imaging sequence on a phantom containing agarose levels of 0%, 2% and 4% with physiological sodium values to mimic tissue. We chose to increase in-plane resolution while setting the slice thickness to 20mm to obtain sufficient SNR.

Different phase-cycling schemes are proposed in the literature for sodium triple-quantum imaging to mitigate biases in the form of 1) B0 inhomogeneity and 2) stimulated echo signals. A complete simulation and explanation of the impact of 1) and 2) is necessary but currently lacking. We developed a simulation based on (Fleysher et al 2010) to gain insight and explain the theoretical background of the phase cycle and signal obtained in the form of images.

DESCRIPTION OF THE MAIN RESULTS OBTAINED

We successfully obtained single-quantum and triple-quantum coherence images of the agarose phantom at 7T (Figure 1). The initially set 8 step phase cycle phase with increments of 45° satisfied the criteria of the maximum value for which 360°/∆j ∈ N and ∆j < 60° to avoid measuring the triple-quantum signal at the Nyquist frequency. We chose a refined coherence sampling of 30° to obtain more points on the sinusoidal signal which increases signal measurement accuracy. From theoretical modeling, we observed that for certain phase coherence steps, ∆j, the maximum signal of the TQ signal is missed and could lead to underestimation of the signal. However, refining the phase coherence sampling increased the phase cycle length and therefore the acquisition time. For a clinical setup, we found a fixed evolution time to be beneficial over the time incrementation approach. The optimal evolution time can, e.g., be obtained by a global spectroscopic measurement (1min) before the actual imaging sequence. Then the signal is measured at a fixed evolution time. The measured data show the signal evolution for stepping through the phase cycle (a 2D image each). Because the time evolution is no longer sampled, we can save measurement time again by repeating the sequence only for stepping through the phase cycle. Repetitions can be used to increase the SNR. A voxelwise Fourier Transform along the phase results in the SQ and TQ images. Acquiring datasets at increasing TR, we confirmed that optimal echo time for obtaining the maximum TQ signal is in the range of the set fixed evolution time, as is also described in (Fiege et al 2013, Fleysher et al 2010)

Mitigating B0 field inhomogeneity is a crucial step to ensure reliable TQ signal measurement. In

Figure 2 the simulation of signal changes for different B0 field offsets W are presented. Simulation parameters (echo time, T2 values etc.) closely fitted the experimental parameters. For a B0 field offset of 25 Hz no signal can be obtained from the conventional phase cycle (Jaccard et al 1986, Reddy et al 1994). If B0 inhomogeneity varies over the region of interest neglecting this effect leads to errenous estimations. An additional phase cycling scheme to mitigate for stimulated echo signal bias was investigated (Tanase and Boada 2005, Fiege et al 2013). The bias of stimulated echo affects the SQ signal and therefore can lead to a different ratio of TQ/SQ signal. However, if the timing of measuring the SQ signal is chosen at the minimum echo time, whereas the TQ signal is measured at its maximum point corresponding to a later echo time, the bias due to stimulated echo signal is of lower importance than a signal drop-out due to B0 inhomogeneity. Finally, TQTPPI sequence can be employed if SNR is high and there is no prior knowledge on relaxation behavior to determine optimal evolution time but is also susceptible to B0 offset. We conclude from the simulations that using the phase cycle according to (Fleysher et al 2010) effectively mitigates this bias. 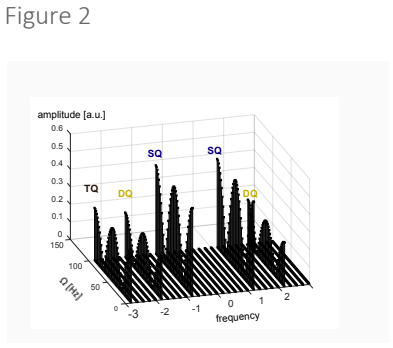 We successfully obtained an in-vivo dataset in the kidney from one healthy volunteer using the TQPPI sequence. In-vivo abdominal measurements further complicate the situation by transmitting and receiving with a multi-array coil data. Post processing optimization is still left to be done. Due to the simulation study results, the sequence will be optimized for the best phase cycle before continuing with in-vivo acquisitions.

The results will be presented in form of a journal paper which is currently under preparation.

The work carried out so far set the foundation of a continuing collaboration to further optimize the sequence according to the obtained simulation results and acquire further phantom and most importantly in-vivo data. Additional work is warranted to study kidney triple-quantum sodium signal in healthy volunteers and ultimately in patients.

The collaboration will be continued and further exchange is planned in the near future where parallel studies could be envisioned to study kidney physiology at both sites.